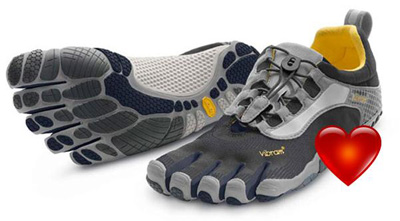 In the last few years, barefoot, or minimalist shoes have gained significant traction in the footwear market. A combination of compelling barefoot running research, a growing paleo movement, which embraces our ancestral lifestyle, and legions of passionate supporters has led to an explosion in popularity.

As I watched people jump on the bandwagon, I stayed on the sidelines.

Whenever I saw someone wearing the most popular of barefoot shoes – Vibram Five Fingers (pronounced Veebram) – I shook my head. Vibrams are those “toe shoes” that provide minimal padding so as to mimic the barefoot experience.

I’m not ashamed to admit that I didn’t even consider wearing vibram five fingers primarily because I thought they looked ugly. Chalk it up to vanity, or stubbornness, I wouldn’t even give the shoes a chance.

I hated, or better yet disliked vibram five fingers because they:

How did I go from hating to loving vibram five fingers and even thinking they look cool? Why would I recommend them to all my friends/family/clients and you?

The following is a story about how I came to love vibram five fingers.

This is what my friend Brian told me while I was visiting him in Los Angeles, CA back in July. Needless to say, I was shocked. I know several people who were bed ridden for 2 days after running the marathon and felt awful for weeks.

I remembered speaking to Brian as he was training for the race and saying bluntly “It’s stupid to run a marathon on pavement in vibrams. Maybe grass, but payment, that’s crazy”. I felt a little awkward using the word “stupid”, but it just came out; possibly out of frustration, or maybe because I didn’t want Brian to hurt himself. The thing is Brian is not a stupid guy, he’s a really smart guy.

Brian never ran much more than 20 feet as a former college football linebacker, but after dropping 30lb and finding vibrams, he’s never looked back. He actually enjoys running and wears vibrams religiously. While I was still very skeptical of vibrams, Brian’s story left a very strong impression on me.

Interestingly, a disproportionately large percentage of fitness professionals who were in the best shape were wearing vibrams.

After a couple of presentations, I headed to the IDEA Expo, which was a massive space featuring every fitness product and method under the sun from Zumba to TRX. One of the first booths as you walk into the Expo was the Vibram booth, which featured a bunch of different vibram models. As I was looking around the booth, a vibram rep named PJ asked me if I needed any help.

I started rambling to PJ about my misgivings about the vibram five fingers and that that I’d been wearing Nike Frees for years. He smiled and said, “Why don’t you try on a pair?” He gave me the Komodo LS. I slipped them on and after just a few seconds of walking, I was simply amazed. I was in disbelief with how comfortable and natural they felt on my feet.

After telling PJ how impressed I was with the shoes, I ended up learning he was a Media Relations and Communications Associate. After I told PJ about BuiltLean, he offered to send me a few pairs to see what I thought. 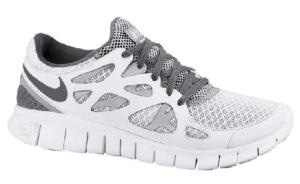 When I got back from the conference, my first workout was a leg workout in my Nike Frees. I started off with some forward and reverse lunges paired with stiff legged deadlifts. I noticed as I was doing the lunges, my feet were moving all over the place in my shoe. I felt out of balance. Ever since I tried on those vibrams, my Nike Frees felt clunky, like I was wearing moon shoes.

I got so annoyed I took my shoes off, and finished my leg workout in my socks. People in the gym were looking at me funny, but I literally was disgusted with how the large sole of the Nike Free (which is technically a minimalist shoe) affected my balance and coordination in a very negative way. I didn’t even realize it before. 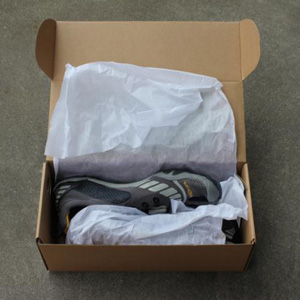 The vibrams PJ sent me arrived within a few days after that leg workout. From the day I received the package of vibrams, I have not put on my Nike Frees, or any other traditional sneaker. I did try as a point of comparison the New Balance Minimus, which is a great minimalist shoe, but it’s nothing like vibrams.

In my first few days wearing vibrams, I walked around and did lifting workouts in the SEEYA, which is the most minimalist of Vibram models. After only the first day, I noticed that my outside toes were straining. In fact, the outside portion of my calves became sore from these little toes I’d apparently never used before in my life. Please Note: If you do try Vibrams, be sure to try them out very slowly as I did. Don’t go for a 5 mile run right away. 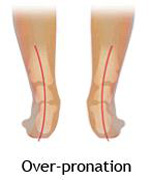 Within the first week, I went to my brother’s apartment a few blocks away from me in NYC to show him the vibram five fingers. He described them aptly as an “exoskeleton for the foot”; the padding is minimal, but still strong enough to allow for running on just about any type of terrain and in a way enhances the way the foot moves.

Within just a couple of weeks, I noticed when I looked down at my ankles that they were completely straight. I used to have over-pronated feet (See: 5 Most Common Posture Problems), which apparently just went away. As an aside, I asked a podiatrist I met recently about my over-pronation, but before I could tell him that my problem was solved by wearing vibrams, he quickly blurted out, “Why don’t you get orthodics?” Classic example of attempting to treat the symptom, not the cause! 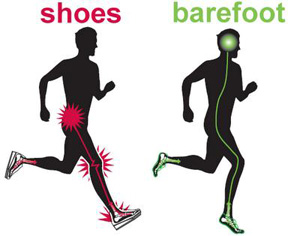 After wearing the vibrams just about everywhere, the last step was to wear them running. I started out with some interval sprints on a treadmill. Just a few minutes into my sprint workout, I realized something bizarre; I usually do 10mph at 10 incline 30 seconds on, 30 seconds off, but I was able to do the same workout with vibrams at 12mph. After reading research showing that barefoot runners have better running economy, I guess it’s not too surprising. A a couple weeks later after doing several shorter runs, I took the vibrams to central park for a leisurely 2 mile run on cement. Yes, my feet were sore after the run and even the next day because I progressed quickly, but nothing else was sore (ankle, knee, hips felt great). If you are an avid runner, keep in mind it can take 3-6 months to make the transition to Vibrams.

Since I had lower back surgery for a herniated disc in college, I honestly never thought I would enjoy running again. But since I’ve been wearing vibrams, I’ve experienced no wear and tear on any of my joints, other than sore feet and calves after long runs, which is just a matter of conditioning.

“The human foot is a masterpiece of engineering and a work of art.”
Leonardo Davinci

Since wearing vibrams, I’m now convinced that not only is proper footwear when exercising is extremely important, but less is more. I’ve seen this not only from my own experience, but those of my clients as well.

In the last year alone, I’ve completed dozens of fitness assessments of people in all different age groups from mid 20’s wall street professionals to 70 year old grandfathers (and even grandmothers).
Every fitness assessment begins with a postural screen. I ask the client to take off his/her shoes, because a proper postural screen always starts from the ground up. Invariably, almost everyone has moderate to severe foot over-pronation and the toes are scrunched together. Even worse, foot strength along with ankle strength and flexibility is significantly lacking.

I also started to notice how awkward traditional sneakers looked when I was viewing my clients and other gym goers train. If I had my clients do a forward lunge for example, their feet, ankles, and knees would move uncomfortably out of balance. Instead of being stable, the feet were moving (while scrunched) around in their sneakers because the sneaker sole with its heavy padding was encouraging this movement.

As I mentioned in my article 7 Insights From The World’s Top Strength Coaches, the concept of functional anatomy and training continues to become more and more important to our BuiltLean exercise philosophy. Wearing vibrams is simply an extension of this philosophy. The foot should be strong, fit, and flexible like any other muscle in the body, as the body is one connected chain (aka the kinetic chain). 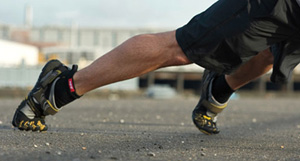 What makes vibrams special compared to traditional sneakers and also other minimalist shoes is that the toes are free to move naturally. They are not constricted. This is a big reason why they were named by Time Magazine as one of the best inventions of 2007. A combination of the toe pockets, exoskeleton design, and barefoot feel (not wearing socks makes a startling difference for how the shoes feel) is what makes this product revolutionary. And now I think they even look cool.

Our feet contain 52 bones, 66 joints, 40 muscles, and hundreds of sensory receptors, tendons, and ligaments, should they really be restricted in shoes all day long? I think not. My balance has improved dramatically, and I actually want to move around and enjoy exercise when I put them on. That alone is worth the $100-$110 price tag.

Is wearing vibram five fingers all roses? Nope. There are some cons which include (1) they can smell, (2) feet can get sweaty, (3) sometimes difficult to put on, (4) takes time to get used to them, and (5) sore feet, especially if you are a runner. While I address these cons in my Vibram Five Fingers Buying Guide, I think the pros far outweigh the cons.

I want to be free of injury, be strong, fit, and flexible with no muscle imbalances, or movement inefficiencies. My guess is you want the same. This is ultimately why I wear vibrams whenever I run or workout.

Should you try Vibrams? What Vibrams should you get? What size is right for you?

I created a buying guide to make buying your first pair a breeze. I also included a list of pros and cons as well:

Let me know what you think of this review and if you have any comments, or questions. 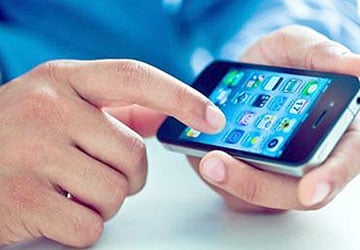 What Is The Best Nutrition App For Tracking Calorie Intake? 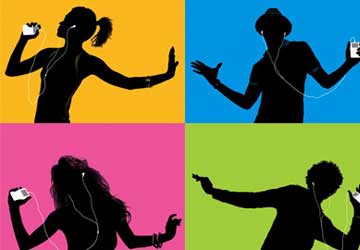 Our Best Workout Playlist | What’s Yours? 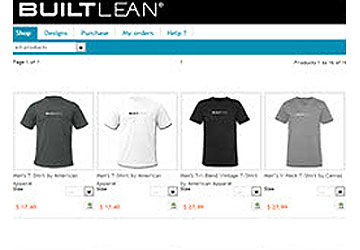 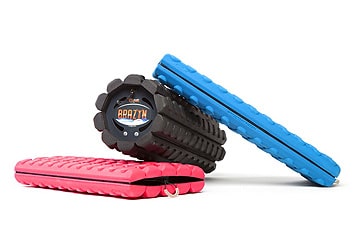 The Morph Review: The Best Foam Roller To Carry Everywhere 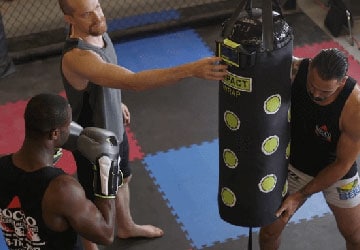 Impact Wrap: A Fitness Tracker For Your Punching Bag 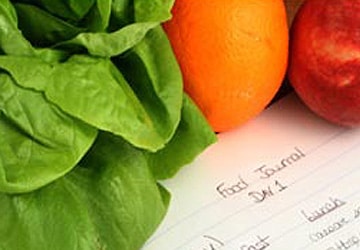 How To Count Calories To Lose Fat (3 Methods)