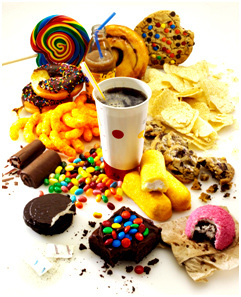 Whether it’s on a giant billboard, in a cheesy commercial, or filling a glossy page of a magazine, unhealthy temptation surrounds us everyday.

Typically, frequently advertised foods are the very ones we crave: foods high in ingredients like sugar, fat, and salt. Specifically, fast food restaurants’ advertisements and menus send environmental cues, which can trigger addictive overeating. Highly processed fast food can become a craving, which is seen in statistics of obesity.1

But just what makes certain ingredients so addicting? Why does it feel like we need more and more of them, the more we eat them?

For more on this topic, check out: 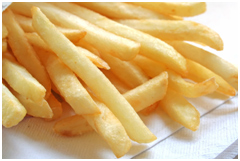 We all know it’s hard to just eat a couple of French fries, especially when we need that salty fix. That salt in those fried potato sticks is precisely what keeps us hooked, and always wanting more. One study reveals that sodium intake creates sensitivity to dopamine, a neurotransmitter that helps control the brain’s pleasure centers. There is actually a connection between salt and addiction-related pathways in the brain. In fact, the same gene group that regulates your appetite for salt also regulates cocaine and heroin addictions.2 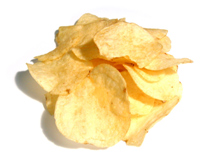 Potato chips are high in salt and fat. When we bite into a greasy, fatty potato chip, our nerve endings send signals, which travel up to the pleasure center – the hypothalamus – of our brains. We eventually overload the pleasure center, and crash. Then, we want more, more, more. Even the “healthier” chips, like baked veggie chips, are usually high in fat. Instead, snacking on foods like baked kale “chips” is a better option when you have a hankering for a salty and crunchy snack. 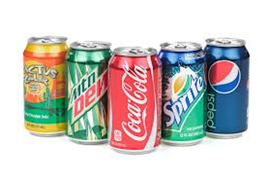 Soda’s combination of sugar or high-fructose corn syrup, with caffeine, is the perfect addictive recipe. The caffeine goes directly into your bloodstream and blocks adenosine receptors, stimulating the adrenal gland to produce the flight or fight chemical adrenaline, which gives people a feeling of energy. In so many words, the body is being forced into an unnatural state that often leaves it exhausted later.

And it’s easy to forget when you’re drinking a coke that you’re drinking tons of calories and sugar too. Only one can of coke has 11 teaspoons of sugar. Acidic soda can also eat up and erode teeth enamel. If gaining weight and decaying teeth isn’t enough reason to avoid soda, the over consumption of soda can cause psychological effects. Studies show drinking too much of a caffeinated soft drink has actually caused or amplified a patient’s mental disorder symptoms.3 4

Do you wonder why it’s hard to steer clear of the breadbasket when you’re out at dinner? When it comes down to it, any processed and high-glycemic carbohydrates, like white breads, are hard to stop eating and make us crave more. One study shows people who consume more nutrient dense, low-glycemic carbs are less likely to overeat. Examples of lower-glycemic foods are most fruit, beans, and whole grains, which release glucose more slowly into the bloodstream, and helps to balance blood sugar and fat storage.5 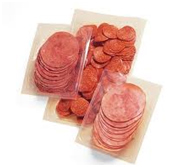 Cold cuts like ham and bologna, hot dogs, bacon, and sausage are all – yet again- jam-packed with salt, and also various chemicals like sodium nitrates. Many of them also contain tons of preservatives and lots of fat. Specifically, hot dogs and sausage can contain up to 23 grams of fat. Consider fresh meats, like skinless poultry and roast beef instead.6

Eating just one Oreo seems like it just not an option. But why? Studies show an ingredient in many baked goods, High-Fructose Corn Syrup, can actually cause reactions similar to those made by drug abuse. When a sweet craving hits, opt for a more nutrient dense snack like berries or another fruit with some cinnamon on top of oatmeal. And you may want to think twice about adding artificial sweeteners to your cup of coffee, because chances are, it may lead to greater sugar cravings later.7

Also full of fat, calories, sugar, and often the addictive High-Fructose Corn Syrup, ice cream can be difficult to portion. Realistically, we’re not going to eat a half-cup of ice cream, which is the typical serving size for grocery store ice cream brands, like Ben & Jerry’s and Haagen-Dazs.

For example, a half-cup of Haagen-Dazs White Chocolate Raspberry Truffle has 18 grams of fat, 310 calories, and 28 grams of sugar. Most people will eat at least one cup of ice cream at a time, doubling all of those numbers. Instead, go for Greek yogurt and fruit, or frozen grapes, or frozen banana. And if you must have the ice cream, pick the lower-fat and lower-calorie ice cream at the store.8

The foods on this list are calorie dense, lack nutritional value, and can be addictive. While most of us indulge in these foods every once in a while, if you find yourself constantly craving these addictive foods, consider writing down the situations you start craving them. Where are you? What do you see? Do you smell something? What time is it? Becoming more aware of why you get cravings can help you make very positive changes to your eating habits.

What do you think is the most addictive unhealthy food?