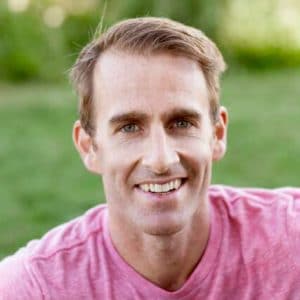 5 Best Places in the World to Learn to Surf

Are you dying to learn to surf but have no idea where to go?

Maybe you’ve heard Hawaii is great for surfing. Or maybe you read about the Top 5 Surf Camps in Costa Rica?

Should you keep it local? Or fly international? What time of the year is best?

This short guide will answer those questions and share my top 5 places in the world to learn to surf. Picking the right location and going at the right time of year is crucial to ensuring you have the best time possible on your surf vacation.

Let’s whip out that passport, pull up Google maps, and go for a little surf adventure.

All 5 spots on this list satisfy the following criteria:

• Warm water.
• Consistent surf.
• Relatively easy to get to.
• Access to emergency care, if needed. 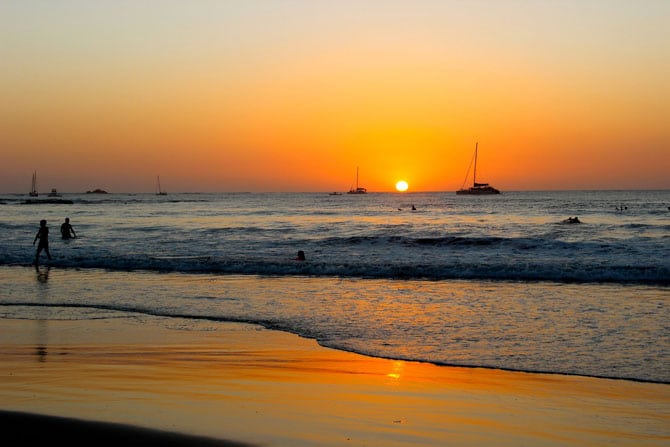 Because of Costa Rica’s location in Central America, it picks up both northern and southern Pacific Ocean swells (insider surfer knowledge – a “swell” is wind energy that travels across the ocean and creates surfable waves when it reaches land).

This means Costa Rica is one of the most consistent places to surf in the world. The water is warm year round, the culture is laidback, and there is natural beauty and cool wildlife everywhere. Costa Rica is also one of the easiest places to get to from the United States. It’s also a relatively safe country with a long history of tourism.

Tamarindo, located in the northwest corner of Costa Rica, is a small surfing and fishing village that has blossomed into a vibrant surf-tourist town with an active nightlife, international restaurants, and plenty of non-surf activities to keep you busy when the waves aren’t good.

While the waves in Tamarindo do get a little busy (especially during Dec-Jan), there are a handful of other great surf breaks only a short drive away. The variety of waves in the area makes Tamarindo a perfect surfing hub for Northern Costa Rica. It has everything from slow, soft-rolling beginner waves, to intermediate beach breaks, as well as advanced tubing reef breaks. No matter your level, there are waves to keep you busy.

In general, the waves in Costa Rica never get too big, which is another great reason it’s such a popular learn-to-surf destination.

As far as the waves go, you can surf year-round in Costa Rica. December to March is high-season for tourism, which means it will be more crowded in the water.

August to November is rainy season which means fewer crowds, but also more unpredictable weather. Expect at least an afternoon shower during rainy season with much more consistent storms in September and October.

My favorite month to visit is November/December when the land is still green and lush from the rainy season, but the hard storms are gone, and the crowds are still pretty light. 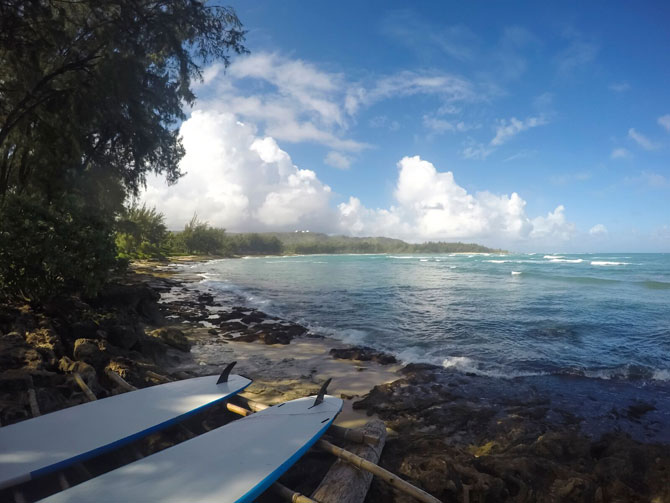 The modern birthplace of surfing has to be on the list right? Hawaii is the iconic surf destination that has it all. On the island of O’ahu, you’ll find plenty of infrastructure, amazing surf instruction, and small, easy waves to practice your surf skills on the south shore.

As a large island chain sitting in the middle of the Pacific Ocean, Hawaii gets waves from all directions year-round depending on what part of the coastline you’re on. The winter months from November–February is when the famous “north shore” of Hawaii starts producing some of the best waves on the planet. The north shore is where “Pipeline”, one of the most renowned waves in the world, takes place.

Pipeline is a thunderous reef break that’s probably one the most dangerous waves you can surf. The wave violently breaks on a very shallow reef that’s only steps away from the beach, making it one of the most advanced waves out there.

But take a short drive 40-miles south to Waikiki Beach, which is located on the south shore of O’ahu and you have one of the best waves to learn to surf. Here you’ll find a slow-rolling, easy break perfect for beginners.

Hawaii has everything from huge, experts-only beach breaks to mellow, beginner-friendly breaks.

There are waves year-round in Hawaii. If you want watch all the action on the “north shore”, December to March is the best time to visit. The waves will be small on the south shore during that time of year, so there will be plenty of waves to ride. 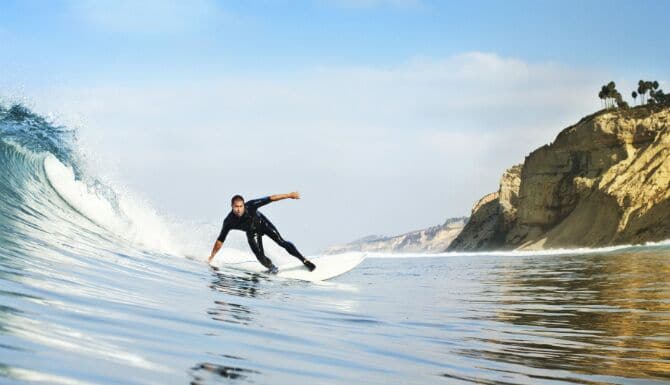 Claiming to be the surf capital of the USA, San Diego has some of the best waves in the United States. While the water temperature is not tropical like Hawaii or Costa Rica, San Diego does enjoy a few months of warmer water towards the end of summer and into early fall.

In San Diego, you’ll find some of the best surf instruction in the world. Go into any surf shop there and get ready to learn everything you ever need to learn about surfing. Of course, surfing in San Diego is very accessible, and care is not far away if something were to happen.

It seems like just about everyone you meet in San Diego surfs so don’t expect to have any empty waves. The beaches are crowded and weekend traffic can be problematic.

End of summer, early fall. For those who are just learning to surf, August to November is a great time to go as the water temperatures will be warmer and waves a little smaller than normal. San Diego’s main surf season is between November to March when the big winter storms produce big waves for the entire California coast. 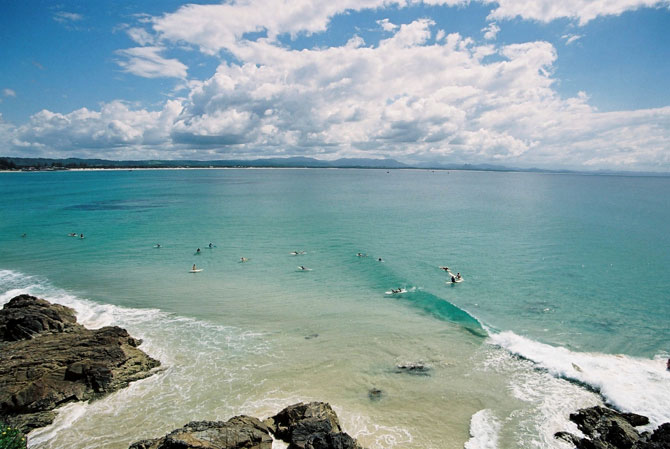 This one is near and dear to my heart as it’s the first place I ever stepped foot on a surfboard over 15 years ago. Located on the east coast of Australia, about 2 hours south of Brisbane, Byron Bay has become a world surf magnet in the last 10 years.

Because Byron Bay jets out from the coastline to create a bay, there are multiple coastlines in the area offering different types of waves. There’s also a rich surf and artist community, which makes for a cool, unique surfing experience. You’ll find plenty of high quality surf schools and surf camps in this surfing mecca.

There are waves year-round, so I would go in the Australian summer months of January to February when water temps will be slightly warmer than normal. Otherwise, the main surf season is from April to September. 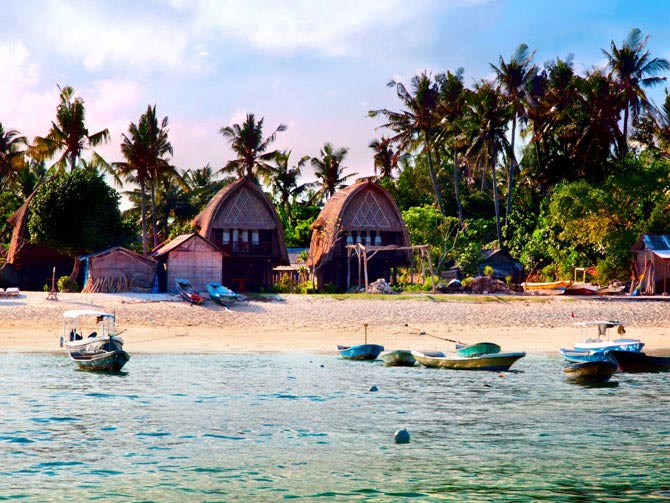 Indonesia is arguably the wave capital of the world. As one of the most popular tourist destinations in all of Indonesia, the tiny island of Bali and the surrounding islands have some of the best waves you can find.

Indonesia is on every surfer’s dream list. During the months of April to September, all of Indonesia lights up with waves – warm water, big swells, and lots of wave variety. Better yet, the cost of food, drink and accommodations are very affordable, especially compared to the other locations on this list.

It’s not uncommon for a budget surfer to get by on $20/day.

Kuta Beach is the surf hub of Bali with very consistent waves breaking on a huge vast beach break. Try venturing out of Kuta to the neighboring areas of Canggu, which is an hour or so northwest of Kuta, for a good mix of beginner to intermediate waves.

There are waves all year in Bali. The large winter storms in the Indian Ocean can produce massive waves from June to September. So for beginners learning to surf, I would go at any other time of year. 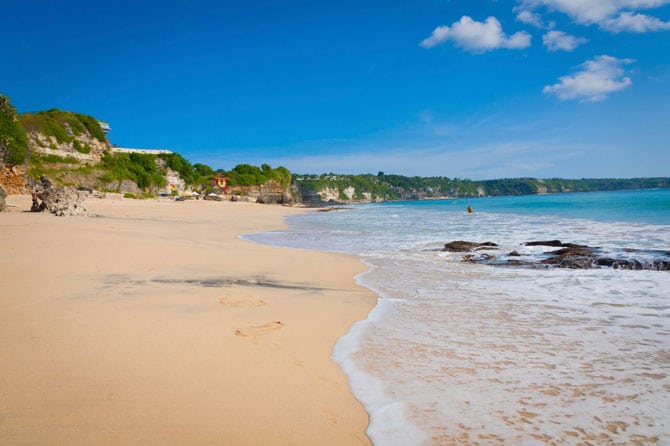 Bali is an incredible place to learn, but there are also hundreds of remote locations you can find on the surrounding islands that will take your breath away.

There’s just no other place like it in the world.

A close second would be Costa Rica (of course), which I’ve been lucky enough to call home for the last 6 years.

A final note about surfing and fitness – Remember, because surfing is such a physically demanding sport, it’s vital to prepare before your trip to make sure you are fit enough to optimize your experience.

Having spent a number of years working at one of the best surf camps in Costa Rica, I can tell you that lack of fitness is the one thing that stops most people from really enjoying their surf vacation. I saw it happen time after time.

If you don’t have the strength to paddle into waves, or the balance to manage instability, or the endurance to last hours out in the water, you won’t be catching too many waves.

Avoid that mistake by training ahead of time using these surfing exercises that’ll prepare you to paddle strong and catch some waves.

As always, feel free to drop me a note in the comments and let me know where you’re thinking about going for your next surf trip. I’d love to know!