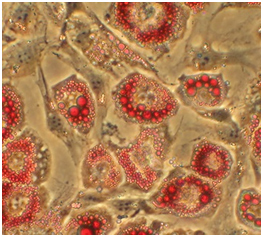 We all know about “fat.” And likely, in the sense that you’re familiar with it, fat is not a good thing. When the word “fat” comes to mind, it generally refers to white adipose tissue. This tissue serves three functions: heat insulation, mechanical cushion, and storing excess energy as fat.

However, this is not the only type of fat in our bodies. We also have brown adipose tissue, or brown fat. The question is: what’s the difference?

What Is Brown Fat?

The two types of fat in your body are fundamentally different. The white adipose tissue (WAT) is what everyone associates with body fat – it’s found primarily just beneath the skin (subcutaneous fat) and around the gut (visceral fat). In the image to the right, WAT 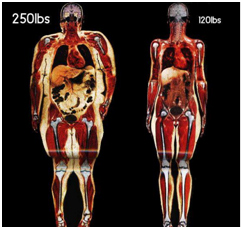 is visually white in color, and you can see it in the obese person on the left beneath the skin and around the internal organs.

Found in the upper back region, close to the skin, it does anything but store excess energy – in fact, a major function of BAT is to expend excess energy as heat. It’s considered “wasting” energy because it burns fuel like carbs & fats for heat instead of converting them into ATP as most other tissues do.

How is Brown Fat Different From Other Types Of Fat?

Historically thought to be important only in infants, who are very susceptible to hypothermia, BAT has recently been found in adults, too1. And most interestingly, BAT might even come from the same cells that go on to become muscle, suggesting it is only distantly related to white adipose.2 So, while it’s called “fat,” its function in your body is highly differentiated from what we think of as “fat” and what we are trying to get rid of by diet and exercise.

Can You Control How Much Brown Fat vs White Fat You Have? 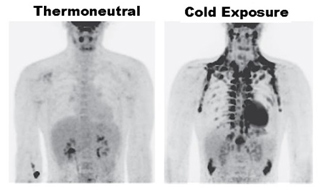 The amount and activity of BAT in our body is primarily regulated by temperature – cold exposure stimulates BAT, leading some obesity researchers to speculate that cold exposure could be a new tool to combat excess fat mass. For example, after spending 2 hours at 61 F, researchers showed significantly enhanced BAT activity compared to when subjects were warm & cozy at room temperature3. The dark areas in the image to the right indicate regions of high BAT activity:

When study subjects put their feet into cold water, the researchers saw similar effects and calculated that regular activation of BAT could lead to an annual loss of 9 pounds of body fat4. That’s a pretty decent amount of fat mass, but it’s at the expense of relatively uncomfortable intervention.

Some studies show that a second form of brown fat can be created from ordinary white fat by exercise, but it is not know how much or how efficient this process is. This type of brown fat is interspersed within white fat in small sections, which makes it more difficult to study, but it is likely that when the calories burned during exercise exceed the number actually used to do the work of exercising, it affects some white fat cells turning brown.5

While brown fat does affect calorie burn in specific situations, and it is certainly better to have brown fat than white fat for health reasons, the presence of brown fat does not necessarily equate to more fat loss under day to day living conditions.

Unfortunately, more studies need to be done in order to prove out BAT’s effect on fat loss, and I wouldn’t volunteer to test it myself because eating better and exercising are tried & true ways to improve body composition.