Are Carbohydrates Bad Or Good For You?

While there are many hotly debated nutrition topics, few evoke as much passion and interest as carbohydrates (aka carbs).

Popular low-carb diets like Zone, Atkins, South Beach, and Paleo limit the intake of carbs, while others like the Ornish diet call for high carbs as the path to optimal health.

Who is right? Are carbs evil? What are carbohydrates anyways?

While carbohydrates can be a very confusing subject, the following will break down all the important concepts, definitions, and topics related to carbohydrates to turn a complex subject into a simple one.

Future articles will expand and explore each concept in more detail.

Carbohydrates are found in foods including fruits, vegetables, grains, potatoes, pastries, and candy.

Here’s a quick list of carbohydrates for your reference: 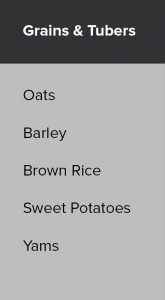 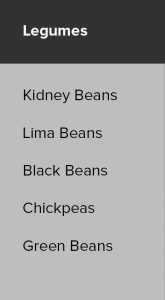 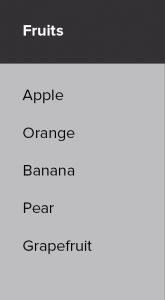 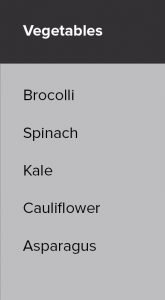 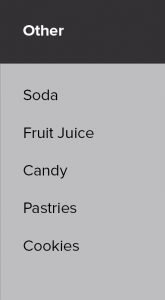 Carbohydrates are classified in many different ways:

No wonder people get so confused!

Remember, carbohydrates are just sugar molecules, all of which are broken down by the body into glucose. Glucose is a single sugar molecule that is used as fuel by the cells in your body from your brain to your muscles.

There are 3 types of carbohydrates that are defined by the number of sugar molecules they contain:

When a carbohydrate is “simple” it refers to mono & disaccharides that are easily absorbed into the bloodstream because of their simple molecular structure. Think milk, fruit, and table sugar.

“Complex” carbs on the other hand are polysaccharides and because of their more complex molecular structure can take longer for the body to break down into sugar. Think grains, vegetables, and potatoes.

You may be thinking, “Ok, so simple carbs are bad and complex carbs are good, right?” The answer is not that simple as you’ll learn in a moment.

As you eat carbs, your blood sugar level rises, which activates the hormone insulin to suck the excess sugar out of the bloodstream and into your muscles (which can absorb about 300-400 grams) and your liver (which can absorb 100 grams).

What happens if your sugar storage tanks (muscle & liver) are full and you keep on eating carbs? Any excess glucose that is not used by the body for energy will be stored as fat.

Many nutritionists do not use the word “bad” when describing food because as the saying goes, “there are no good, or bad foods, only good, or bad diets”.

This is important because large spikes in insulin levels affect your hunger (can make you even more hungry), can negatively impact fat loss, and even lead to diabetes if levels are chronically elevated from over consumption of fast digesting carbohydrates.

Here’s a short list of some high and low glycemic carbohydrate foods: 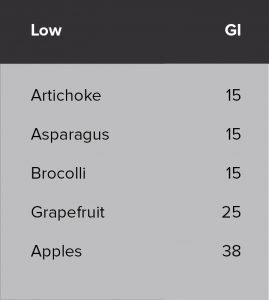 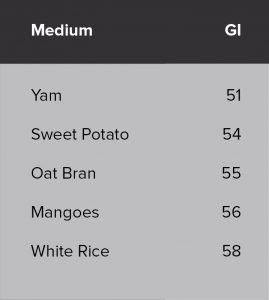 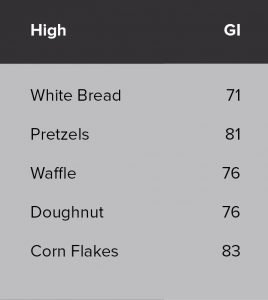 While the Glycemic Index can be helpful, it’s not perfect. For example, some ice cream can show up as 30 on the glycemic index, along with some other carbohydrate sources like spaghetti that are nutritionally anemic and provide substantial calories in small servings.

In addition, foods like watermelon that are high on the Glycemic Index impact blood sugar levels far less when adjusted on a per serving basis (watermelon is mostly water, hence the name).

This concept is referred to as the Glycemic Load. Lastly, when combining the carbohydrates with different foods like dietary fat, the pace of digestion can slow down.

If you are eating whole, natural, unprocessed carbohydrates, you can consider them a good carb, but if the carb was made in a lab, or has been processed such as soda, candy, or white bread, it’s a “bad” carb, or better yet – not ideal.

I don’t like using the bad word unless describing High Fructose Corn Syrup, which is a chemically altered sugar found in tons of foods we eat every day. More on HFCS another time!

Do Bad Carbs Make You Fat?

I wish I could answer this question easily, but even an experienced researcher with a PHD would cringe at the thought of a proper answer.

There are two primary camps that attempt to describe how we gain and lose fat:

Who’s right? Well that’s worthy of a separate blog post for sure, maybe even a book, but my best guess is the truth lies somewhere in the middle; eating less calories helps you lose weight, but eating too many carbs and not enough protein may have you gaining fat, and possibly even losing muscle.

Furthermore, genetics, hormones, and activity level play a huge role in how easily carbs are stored, used as energy, or converted into fat.

Eating some candy, or cookies here and there will not make you fat, but eating a lot of fast digesting carbs combined with excess calories and no exercise is a great strategy for adding a bunch of body fat.

So How Many Carbs Should You Eat?

This question will also be explored in more detail in a separate post, but here’s the short scoop:

The amount of carbohydrates you should eat depends primarily on your genetics, body size, and activity level. If you are a 180lb sedentary guy who wants to maintain weight with a few workouts per week, a good benchmark for carb intake is around 200 grams of carbs. The more active you are, the more carbs you can add.

Endurance athletes can and should eat around 300-400 grams per day to help fuel their workouts. The minimum RDA (Recommended Dietary Allowance) for carbs is 130 grams, with 55% of total calories coming from carbs as the general recommendation.

From an evolutionary standpoint, carbohydrates are not essential, which means we do not need to consume carbs in order to function.

In fact, if you eat no carbs at all, your body will break down body fat into small molecules called ketones. Ketosis is this process of creating ketones when our body uses primarily fat for energy, which is associated with a carb intake of under 25 grams (under 100 grams is when ketones are first present in the bloodstream and urine).

Our bodies not only use fat for energy during ketosis, but may also convert protein (both dietary and muscle) into carbs to be used as fuel.

You may be thinking – “I need to get into a state of ketosis immediately” given the apparent fat burning potential. While ketosis is a cool adaptation, it may leave you with low energy levels, really bad breath, inability to concentrate as effectively, along with serious vitamin and mineral deficiencies.

Furthermore, research studies do not show fat loss is any greater during ketosis versus a diet of equal calories with a lot more carbs.

When it comes to carbs, use your common sense – a few servings of fruit, plenty of veggies (which provide few calories but tons of nutrients), some starch/grains (or a lot if you are very active) each day should help fuel your body and provide the essential nutrients it needs to function optimally.

Carbohydrate – sugar molecules that are a union of carbon, hydrogen, and oxygen (CHO) and are broken down by the body to be used as fuel. One sugar molecule is a monosaccharide, two is a disaccharide, and more than 10 is a polysaccharide.

Glucose – A monosaccharide found in plant and animal tissues, which is transported by the blood to all the cells of the body to be used for energy.

Glycogen – A polysaccharide that is the main form of carbohydrate storage in animals and occurs mainly in liver and muscle tissue; it is readily converted to glucose and glucose is converted into glycogen.

Glycemic Index – an index ranging from 0 to 100 indicating the effects of various foods on blood sugar. Fast-releasing foods that raise blood sugar levels quickly are high on the index, while slow-releasing foods, at the bottom of the index, give a slow but sustained release of sugar

Gylcemic Load – an index indicating the amount of carbohydrate contained in a specified serving of a particular food. It is calculated by multiplying the food’s glycemic index by its carbohydrate content in grams and then dividing by 100.

Blood Sugar Level – The concentration of glucose in the blood, measured in milligrams of glucose per 100 milliliters of blood. The normal fasting value is between 3.9 and 5.6 mmol/l.

Ketosis – the abnormal accumulation of ketones in the body as a result of excessive breakdown of fats caused by a deficiency, or inadequate use of carbohydrates

Insulin – A hormone secreted by the pancreas in response to high blood sugar levels. Insulin regulates the body’s use of glucose and the levels of glucose in the blood by acting to open the cells so that they can intake glucose

Glucagon – a hormone secreted by the pancreas that acts in opposition to insulin (raises concentration of sugar) in the regulation of blood glucose levels.

Fiber – a type of carbohydrate that is coarse, indigestible plant matter that when eaten can help improve digestion.