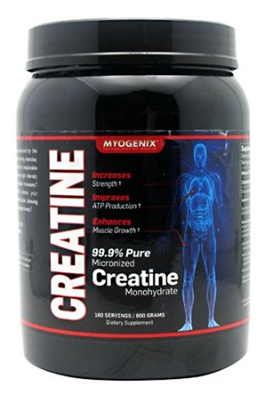 Creatine is an organic acid that plays a key role in supplying energy for muscle cells during intense activity.

Creatine is produced naturally by the body and found in small quantities in animal products. Creatine stored in muscle cells helps produce ATP, which is the primary energy currency in the body.

While creatine is not an essential nutrient because the body can synthesize it, it’s one of the most widely used supplements because there is strong evidence it can improve performance and is safe for most people. Additionally, creatine may have other health-promoting properties beyond its ability to make a person stronger or faster.

Creatine Supplementation vs. Creatine In Foods

An average human body contains between 3.5 and 4 grams of creatine per kilogram of muscle. However, it is capable of storing up to 5 grams per kilogram. The idea behind supplementation is that by saturating the body with creatine, you augment its benefits. The richest sources of creatine from food are beef and fish, which contain between 2 and 5 grams per pound.

Because most research on the benefits of creatine is done on dosages of 5 grams, it is largely impractical for most people to try to reap the benefits seen in studies without supplementation. Of course, the potential risks of any supplement should be weighed against the benefits before using. But, should you decide to use creatine as a muscle builder, you will need to supplement in order to receive its effects.

Extensively studied for both its safety and benefits, some of creatine’s supposed benefits are supported by research and some are not. Creatine also shows promise outside of the athletic and performance setting, but more research is needed in these areas.

Creatine supplementation should be safe when used by healthy individuals. Most of the health risks attributed to creatine (kidney and liver damage, increased risk of injury) have not been shown in clinical studies.8

Although no long term studies have examined use of creatine, I am unaware of any reports of physical harm from supplementation in a person without kidney disease. However, there is evidence creatine supplementation can damage unhealthy kidneys.9

Dehydration is also a concern with supplementation, as creatine will draw water into the muscle cell. If you use creatine, be sure to drink plenty of water, which you should be doing anyway. And as with all supplements, due to a lack of regulation, toxins and impurities in a product are always a concern. Buying a reputable brand makes this less of an issue.

GI distress is a common side effect of creatine. Taking it with food, not “loading” (see below) or perhaps using a form besides monohydrate may lessen or eliminate this reaction.

Again, creatine is very safe for most people. However, since kidney and liver disease, in their early stages, may not produce any symptoms, it is a good idea to have your doctor test your kidney and liver function, especially if you plan on using supplements.

There are many different kinds of creatine available. If you look on the shelves of a supplement store, you will see creatine monohydrate, creatine ethyl ester, creatine hydrochloride, creatine AKG and others.

The oldest form is creatine monohydrate, and this has been the compound used in essentially all of the well-designed studies. For this reason, I recommend this form over the newer, non-research backed forms. It also happens to be the cheapest. I recommend a pharmaceutical grade product such as Myogenix (affiliate link) to avoid the possibility of toxins or impurities in the product.

Creatine users often do a “loading phase” of taking 20 grams throughout the day for 5-7 days before moving a maintenance phase of 2-5 grams per day. Research has shown this to increase the rate at which muscles become saturated.10 However, loading is not necessary for creatine to exert its positive effect.11.

In some models, the presence of insulin increases the amount of creatine that is absorbed into the muscles.12 Caffeine may lessen it.13

Take 3-5 grams of creatine monohydrate with either your pre or post workout shake. Should you choose to load, take 5 grams 4 times per day for 6 days followed by 3 grams per day, after your doctor tells you your kidneys are healthy.