5 Dairy Milk Alternatives: How They Stack Up 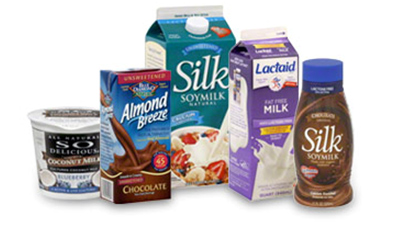 Whether it’s in our coffee, cereal, or enjoyed with our home baked goods, dairy milk is often a staple in the American diet. It’s the fourth highest-consumed beverage in the U.S.

But these days, dairy milk alternatives are becoming more and more popular. Reasons for people switching to a milk alternative abound: including veganism, lactose-intolerance, milk allergies, or simply personal preference.

In 1970, the average person drank 29.8 gallons of cow’s milk a year. By 2011, that number decreased to just 20 gallons a year. The reason for this dwindling number? Possibly, from people swapping out cow’s milk for something else.

Before switching to a milk alternative, it’s important to understand the health benefits of each one, and decide which will benefit your individual nutritional needs. Milk alternatives, like almond and soymilk, vary in nutrients. But collectively, they are all lower in sugar than dairy milk, which is a definitely plus.

We all know milk has a reputation for delivering its bone-strengthening calcium, and it still stands true that cow’s milk naturally has the most. However, dairy milk alternatives are fortified with vitamins and minerals, including calcium. While the body may not absorb quite as much calcium from these products, it will still usually receive a significant amount from fortified products. But remember to shake the carton of your milk alternative before drinking it, as this keeps the calcium from staying at the bottom.

Read on to understand what each type of milk has to offer, and how it stacks up against dairy.1 2 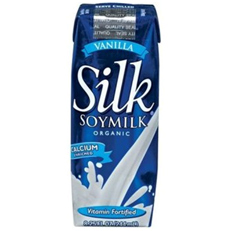 Soy milk is made from soybeans. Its taste has a smooth and balanced combination of sweet and bitter. One of the most popular soymilk producers is Silk, which offers a variety of flavors, including chocolate and vanilla soymilk. Since soymilk is plant based, it contains absolutely no cholesterol, making it a great option for people trying to lower those levels. Unlike other plant-based products, soy contains all the essential amino acids. Additionally, soymilk has been found to lower blower blood pressure in people with moderate hypertension.3 On the flip side, some studies show that soymilk causes some negative affects on the thyroid, because soy isoflavones can possibly use up some of the body’s iodine it would normally use to create thyroid hormone. Soy can also prevent protein and mineral absorption.4 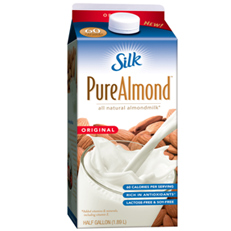 Almond milk has been around since the 90s, but only became popular in more recent years as we realized the concept of healthy fats, like nuts, and how they can benefit our health. Almond milk is made when roasted almonds are crushed up to make almond butter. It is mixed with water plus vitamins, stabilizers, and sometimes a sweetener. Almond Breeze is one of America’s top-selling almond milk brands, and offers several choices of sweetened and unsweetened flavors. It generally has a sweet and nutty taste to it, and it’s obviously not suited for those with nut allergies. Almond milk provides a vast variety of vitamins and minerals, and it is one of the lowest-cal milk alternatives, with only about 60 calories per serving (1 cup). However, almond milk falls short in the protein department,
delivering about 1 gram of protein per serving (1 cup),
which is about 6 grams below soy’s protein count,
and about 7 grams below dairy milk’s protein count.
However, almond milk has no saturated fat, while 2%
dairy milk has at least 3 grams.5 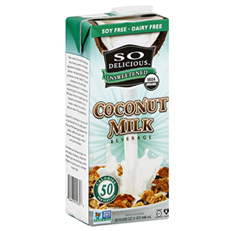 Coconut milk comes from the “meat” inside of a coconut. While it has been a longtime staple in Thai and Indian cuisines, coconut milk is becoming more and more popular in everyday use among Americans. Naturally, coconut milk contains high amounts of immune-boosting vitamin C and E, as well as antioxidants. It also has high levels of magnesium, phosphorous, and potassium. The heavier coconut milk often found in dishes like curry, is commonly knocked by dieters, as it is often packed with hundreds of calories and more than 40 grams of saturated fat (per cup). However, saturated fats from coconuts are comprised of medium chain triglycerides (MCT’s), which studies show may aid in weight loss and improve health.67 Nonetheless, if you are trying to cut calories,
consider choosing the light, lower-fat option of coconut milk,
such as Silk’s Pure Coconut Milk. 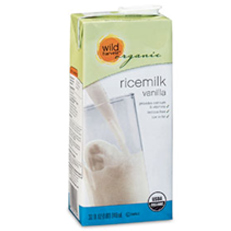 Rice milk is made from ground rice (usually brown rice). One of the largest rice milk brands is Rice Dream, which offers flavors like carob, chocolate, plain, or vanilla. Rice milk is very low in fat and calories, and has a thin consistency, much like cow’s skim milk. Like almond milk, rice milk lacks protein, delivering only 1 gram. It is considered to be one of the less nutritious milk alternatives, because it naturally lacks vitamins A, D, and B12. However, companies like Rice Dream sell milk fortified in all of the above vitamins. Rice milk is a solid choice for people who cannot have soy, nuts, or lactose. 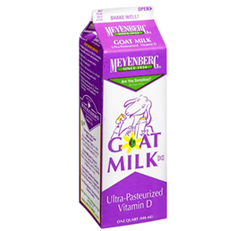 Goat milk is often more easily digested, and therefore, more commonly consumed among children, the elderly, or the ill. Its protein content nearly matches that of cow’s milk, and it contains more tryptophan, an essential amino acid. It’s been found to help prevent anemia, or iron deficiency, as well as bone demineralization, because of its high availability of iron, calcium, magnesium, and phosphorous. However, goat milk does contain some lactose, making it off limits for those with a sensitive intolerance. It also has a unique combination of a sweet and salty taste, and gives off a stronger odor than some prefer.8

Dairy Milk Alternatives Chart: See How They Stack Up

Note: All information comes from milk alternatives fortified with vitamins and minerals, and all show the nutritional value in 8 ounces

Which dairy milk alternative is your favorite?