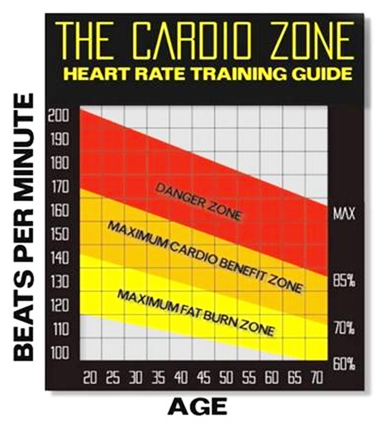 The fat burning zone is one of the most pervasive myths in the fitness industry that just won’t go away. Magazines constantly promote workouts in the fat burning zone as an effective way to burn fat and most cardio machines around the world have some type of sticker, or image clearly visible (see image to your right).

The idea is if you keep your heart rate in the “fat burning zone,” which is roughly 55% to 65% of your workout to optimally burn fat., then you will magically burn more fat than at higher levels of exercise intensity.

Why work harder, when you can take it easy and burn more fat, right?

This article will teach you 2 specific reasons why the fat burning zone is a myth so you can workout to optimally burn fat if that is your goal.

To understand the fat burning zone myth, you need to understand how your body uses energy during exercise. To keep things simple, during exercise your body draws energy from two places: fat or glycogen stores. Glycogen is stored carbohydrates in your muscles and liver.

The fat burning zone was conceived because at lower exercise intensities more fat is burned relative to glycogen. Isn’t this awesome? Now you can hang out on the couch and lose a bunch of fat. I hope you are starting to smell something fishy with this idea of a fat burning zone.

So why the heck would you want to workout so hard if you burn so little fat?

The reason why is because it’s all about calories. You burn a lot more calories when you workout intensely than you do when you are sitting on the couch.

There is something important we are missing in these calculations, which you will learn in the next section.

The Fat Burning Zone Has No Afterburn Effect

Estimates of the afterburn effect vary wildly depending on the exercise method, the intensity of the workout, and even how its measured.

What was the difference in calorie burn? Quite substantial.

If this isn’t enough convincing, one study showed a significant amount of fat was broken down from fat stores in the muscle following high intensity cycling sprints.3 During high intensity exercise, you are burning primarily glucose, but after is when you burn the fat. This is the crux of the fat burning zone myth and the afterburn effect.

While low intensity exercise certainly has its place within an exercise regimen, relying on exercise in the fat burning zone to burn fat is not an efficient approach. Contrary to popular belief, getting up early in the morning to do low intensity cardio on an empty stomach will not help you lose more body fat versus other more intense methods. For busy people, interval training and circuit training workouts are substantially more efficient to help you burn far more calories in much less time, and burn more fat in the process.

With all that said, I highly recommend not relying on exercise to “burn fat” to get lean. In the context of a fat loss program, exercise helps you keep your muscle, stay fit, make modest increases to your metabolism, and burn some fat. Because it’s a scientific fact that you must eat less calories than you burn to lose fat, nutrition has a much more powerful impact on this equation and consequently, it should be your main focus.