How Deep Should You Squat?

“How Deep Should I Squat” is a very common question that causes a lot of confusion.

Research suggests squatting “below parallel” as the safest and most effective squat technique. “Below parallel” means that your hips should drop below your knees during a squat.

Conventional wisdom teaches us the safest way to squat is to form a 90 degree angle at the knees, but the exact opposite is true. The 90 degree, or L-angle decreases the stress on your knees slightly (about 28%) but increases the stress put on your back by over 1000%.

As long as you can maintain the natural S-curve in your spine, along with keeping your knees aligned with your toes, a deep squat can be completely safe. 1

If your legs stay above that 90 degree mark, which I see often in the gym, the emphasis of the exercise will be on your quads (the front of your thighs). If you’re able to drop below 90 degrees (break parallel), then you start to activate the large musculature on the backside of your body – your hamstrings and glutes. 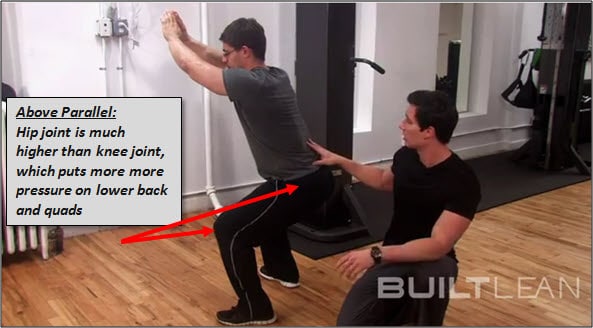 Now that you know it’s more effective and safer to drop below parallel when squatting, let’s go through some commonly asked follow up questions:

You still might be concerned about the extra strain put on your knees from dropping below parallel, especially since I said it puts an extra 28% strain on your ACL. This is a fair concern, but there is a slight increase in tension on the ligament, the lower you go, the more muscles you activate which helps to stabilize that ligament.

In other words, a deep squat slightly increases the strain on your knee but at the end of the day it’s still safer than a simple leg extension machine if proper squat form is used.

2. “I’ll have to drop the weights considerably to squat below parallel. Isn’t using heavier weights better?”

While this is true with most exercises, having impeccable squat form is imperative. The squat is a coordinated, high impact movement. You may have to drop the weights for some time to improve your squat depth and form, but it will be worth the time and effort. You won’t have to worry about hurting your knees or back, as most people who get injured from squats have poor form and depth.

3. “What if I can’t squat below parallel without my back rounding or hurting?”

For most people who are unable to squat below parallel, a lack of flexibility or the inability to activate the proper “assistance” muscles is usually the issue. When your back rounds during a squat, it’s usually from a lack of core strength, or flexibility issues that can emanate from your calves to your thoracic spine.

Other issues may include knee, or back injuries, which may require switching to a different squat technique such as a front squat or goblet squat.

The next video addresses How To Increase Squat Depth, which will teach you 5 ways to help improve your squat depth.