Is Microwave Cooking Bad For Your Health? 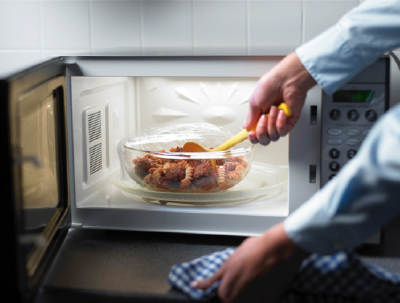 One of the most commonly used kitchen appliances, countless people reheat and sometimes cook their food in the microwave oven.

How does a microwave oven work, and more importantly, is using one bad for you?

Since microwaves are a form of radiation, it seems reasonable to be concerned about their safety. This article will address the safety and usefulness of a microwave oven as part of a healthy lifestyle.

How Exactly Does A Microwave Cook Your Food?

Microwaves are part of the electromagnetic spectrum, like sound waves and radio waves, and are used not only for food, but also in TV broadcasting, radar, and mobile phones. Microwave radiation is “non-ionizing,” just like light lacks the energy to change the molecular make-up of substances.1

Materials react to microwaves in different ways. Metallic objects reflect microwaves, glass is transparent to microwaves, and plastics react differently depending on the type. Materials containing water (i.e. food and body tissues) absorb the energy from microwaves.2 Once absorbed, the energy turns into heat, which is how a microwave cooks or heats food. Interestingly, microwave-safe food containers do not get hot unless there is food in them, in which case the heat is secondary to the food.

Is It Safe To Heat My Food In A Microwave?

There are a couple of things to consider in terms of safety regarding the microwave.

1. Thermal Effects: You can burn yourself by handling any very hot food no matter how it’s cooked. However, due to the unique way microwave ovens work, there are certain things to watch out for. Foods that are made up of materials that heat at different rates or have an outer “skin,” like hotdogs, can heat unevenly and explode. A microwave can super-heat water without the water actually boiling, a mechanism which allows steam to escape. If you introduce something to the water, like a tea bag or instant coffee, the water can suddenly boil. The FDA has received multiple reports of people being seriously injured by this phenomenon.3

2. Food Safety: Microwaves do not evenly cook thick pieces of food. For example, the inside of a large piece of chicken is cooked by conduction of heat from the outside of the food, not by the microwaves themselves, which do not easily penetrate the outer parts. The potential danger is that the insides may not reach a temperature high enough to kill bacteria and other organisms that can cause illness.

3. Safety of Microwaves Themselves: It is tough to debate thermal effects of microwaves and food safety, but the actual safety of the microwaves themselves is a hotly debated topic. The major concern over microwaves’ use is that the radiation may change the chemical structure of the foods they cook. While microwave radiation is definitely non-ionizing, certain chemical reactions that take days or weeks to complete in a lab can be sped up significantly in the microwave. To date, there is no definitive data to prove or disprove whether microwaves can alter the make-up of food in a bad way, and although it may seem unlikely, it is certainly not out of the realm of possibility.

Another concern is that the microwaves can escape the oven and damage human tissues. Microwave ovens are strictly regulated internationally and compliant ovens do not emit radiation anywhere near the amount needed to damage tissues.4 Still, certain parts of the body, like the eyes, are more susceptible than others, so whether your oven conforms to guidelines it is still probably a good idea not to put your nose up to it to see if your food is done.

4. Chemicals: Since the term “microwave safe” is not regulated by the government, it is largely irrelevant. When you heat plastics in the microwave, they can release high amounts of Bisphenol A, a chemical used to make plastics.5 BPA can cause neurologic and developmental damage, as well as a host of other issues. BPA deserves its own article, and while some people believe it is not harmful, many feel the opposite (and have evidence to support it), and I think it is very wise not to heat plastic in the microwave, no matter what the container says.

Should I Stop Using A Microwave?

Like most of the things I write about, there is no cut and dry answer to the question “are microwave ovens safe?”

The research gives certain implications, but it is a lifestyle and personal choice. As I have said, extra body fat can kill you. Among other things, it increases your risk of certain cancers, diabetes, stroke and sleep apnea. If using a microwave allows you to achieve and maintain an optimal body composition, its benefits likely outweigh the risks.

In an ideal world, nobody would use a microwave, but it can be an invaluable tool for a busy person who is looking to lower body fat. Eating controlled portions of microwaved sweet potatoes alongside dark green vegetables and a lean protein is a much better choice for a busy professional with multiple commitments than trying a 100% raw diet for 2 days then eating 3 Quarter Pounders because the former was unmaintainable.

What do you think?