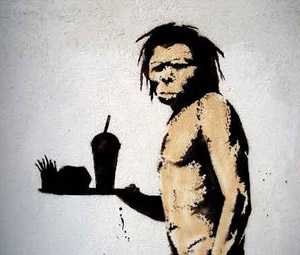 In all the buzz about the Paleolithic Diet lately, there are lots of questions and differing opinions on just what it is and why you would actually want to “eat like a caveman”.

With so much disparate information out there, getting a balanced view of this new-kid-on-the-diet-block can seem overwhelming. Luckily, we’re here to help!

What is the Paleo Diet?

Unlike many other “diets,” the Paleo Diet is meant to be more of a change in lifestyle than a temporary solution to shed some pounds. It is based on the idea that humans existed as hunters and gatherers for over 2 million years before the Agricultural Revolution introduced grains and dairy products as staple foods to the human diet around 10,000 years ago.

Since our genetic makeup is nearly identical to what it was prior to the introduction of farming (it’s only changed about 0.02%), the Paleo Diet suggests that we are predisposed to eating things you could either hunt for or gather – game meat, roots, berries, nuts, etc – but are not meant to eat things like grains that have to be heavily processed before consumption. In a nutshell, we should be eating like our ancient caveman (and cavewoman) relatives. .

But what does it mean to eat like a caveman? Depending on who you ask it could mean a lot of things, but the basic idea is to only eat foods that can be found in nature and consumed in their raw states or with very minimal preparation. Essentially, anything that has to be refined or cooked extensively to be edible is out.

Here’s a quick rundown of what you should and shouldn’t eat on the Paleo Diet:

Now, you might be scratching your head a bit: the good foods list has a bunch of quality consumables that you’ll find on just about any nutritional blueprint – no problem there; however, the bad foods list axes out a good chunk of the typical modern diet including some foods that are widely considered healthful (whole grains and yogurt, for example). Is Paleo throwing the baby out with the bathwater? This is the crux of the debate…

Is The Paleo Diet Overly Restrictive?

At face value, the Paleo Diet uses some pretty solid reasoning as to why these foods are verboten, but on further review, it can begin to seem a bit simplistic and overly-restrictive. Like so many other things in life, the answer probably lies somewhere in the middle so let’s take a look at the no-fly list and see if we can’t find some common ground. 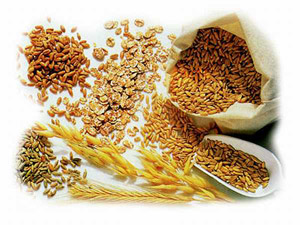 Taking front and center of the Paleo controversy is whether you should even be eating things like wheat, rice or corn, let alone making them the base of your food pyramid. Paleo advocates will point out that grains are not only difficult for humans to digest in their raw states, but they can actually be quite toxic.

Found on uncooked grains, a type of protein called “lectin” serves as a natural insecticide to plants, but also interferes with digestion in humans and is a significant cause of food poisoning around the world. Cooking reduces, but doesn’t completely destroy these toxins, which is why they are strictly off the Paleo menu…

Take into consideration, though, that the rice-based diet of the Japanese people has made them the healthiest and longest-lived population on the planet.1 Also keep in mind that a lot of top athletes and trainers swear by starting every day with a big bowl of steel-cut oats, which are packed with vitamins and minerals and are generally considered one of the healthiest foods around.

Grains may or may not be the villain that hardcore Paleo proponents make them out to be, but one thing both sides can agree on is to stay away from refined grains (white flour, in particular). The refining process strips the grain of most of its nutrients and leaves only a high-carb, calorie-dense powder. Whole grains are much more nutritious and also packed with fiber. 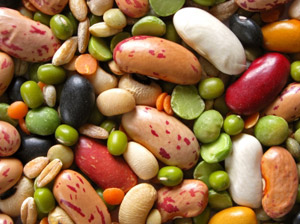 Like grains, many beans are rife with lectins and are only edible if cooked extensively or fermented. Kidney beans and soybeans 2, especially, can be quite toxic if eaten raw. In fact, as few as 4 or 5 raw kidney beans can bring on typical symptoms of food poisoning – and undercooked beans are thought to be even more toxic!3 4

Peanuts5 are actually edible in their raw state, but are very susceptible to mold and fungus. Of particular interest is aflatoxin, a poison produced by the fungus Aspergillus flavus. Twenty times more toxic than DDT, aflatoxin is known to cause liver cancer in lab animals and is thought to be a significant contributor to liver cancer cases in Africa where peanuts are a dietary staple. Improved handling and dry roasting have greatly reduced the risk of aflatoxin, but the Paleo Diet again says we’re better off without Mr. Peanut.6

If you’re sad now because you love peanut butter and chili (preferably not together), you will be comforted to know that a) peanuts undergo rigorous testing by the U.S. Food and Drug Administration to make sure no aflatoxins find their way to your belly and b) proper preparation greatly reduces the chances of beans making you feel not so magical. 7 Boiling kidney beans for 10 minutes almost entirely mitigates the toxins, but be careful when using a slow cooker, as the temperature may not get high enough to do the job.

Most beans, though, are considered quite healthy since they are a good source of protein, fiber, and complex carbohydrates. Cutting them out entirely limits your nutritional arsenal, but may be an option if you’re going the low-carb route. Peanuts, on the other hand, are not only a great source of monounsaturated fats and protein, but recent studies have shown that they rival berries, apples and beets for their antioxidant properties. Can you really turn your back on a food that’s been shown to protect against gallstones, Alzheimer’s disease and certain cancers? 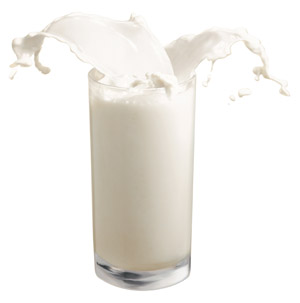 Can you guess how many animals besides humans drink milk after weaning? Zero. That’s because mammals only produce milk long enough to get their young through infancy, at which point they are weaned from their mothers and lose the ability to process lactose. In fact, most humans around the world trouble with dairy – it is estimated that over 75% of the adult population is lactose intolerant to some degree. 8

Dairy did not even play a factor in the human diet until early Europeans began domesticating cattle for about 10,000 years ago. If you can make it through a cheese pizza with no problems, you are likely descended from those pioneering individuals and part of the other 25% that has what is called “lactase persistence”.

While lactose (with an “o”) is the type of sugar in milk, lactase (with an “a”) is the protein your body produces to digest it. Everyone starts out with the genes to make lactase, but they stop working after infancy in most people. If you are descended from those early milkstache-wearing farmers, though, your body continues to produce it and you’ll typically have no problems with dairy.

The Paleo Diet doesn’t really make this distinction, though. It figures since humans were not originally intended to drink milk, you shouldn’t either. That is not necessarily bad since milk is fairly high in sugar and a lot of people have problems with lactose, but you’ll also be missing out on a good source of protein and calcium. Additionally, yogurt has been shown to promote gastrointestinal health, boost immune response, lower bad cholesterol, raise good cholesterol and increase fat loss. If you’re not intolerant, that sounds like a pretty sweet deal. 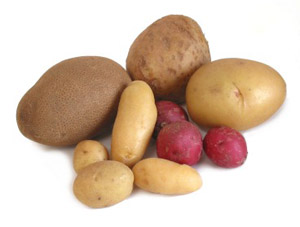 Starchy vegetables, potatoes in particular, are a matter of some debate when it comes to the Paleo Diet. Many advocates say true root vegetables like carrots and sweet potatoes are okay, but regular potatoes and other tubers are not. Others say any starchy vegetable is okay in moderation. Still others say no starchy vegetables at all because they can be toxic (like cassava and green potato) and require too much processing to eat.

I don’t think it’s too much of a stretch to say carrots and sweet potatoes are ridiculously good for you, but regular potatoes are not quite as cut-and-dried. Many people will point to their high glycemic index and carbohydrate load as proof of their evilness, but if you live an active lifestyle, that’s actually not a bad thing.

If you’re just going to sit in front of the TV all night, you might want to pass on the potatoes and have a salad instead, but that certainly doesn’t make them unhealthy. In fact, potatoes have lots of vitamins and minerals and have been shown to help protect against cardiovascular disease and respiratory problems. So there’s no need to be afraid of spuds in moderation, just don’t overdo it with the butter and salt!

So, Should You Eat Like a Caveman or Not?

It might seem like I’ve come off as overly-critical of the Paleo Diet but I’m actually a pretty big fan of the concept. Getting back to a simpler, more-natural diet is really conducive to maintaining a healthy lifestyle, but as usual, the devil’s in the details.9

Saying that our ancient tribal ancestors ate a particular way is a somewhat superficial endeavor since they were much more worried about survival than whether or not something was Paleo-friendly. What they ate also varied greatly by region – the traditional Inuit diet, for example, is almost entirely comprised of meat with 50-75% of calories coming from fat. Ancient Polynesian diets, on the other hand, were more balanced with fish, coconut, taro and breadfruit. The Maasai tribes of Africa survive mostly off of raw meat and milk and blood from cattle. There is no singular tribal diet.

Humans are resilient, adaptive creatures. We do anything we can to survive, whether that is picking berries from a bush or running down an antelope. One of the biggest problems today is that we no longer have to expend any energy to get our food. It’s processed, packaged, and shipped to convenient locations that we spend only minutes driving to. We consume massive quantities of easily-accessible, non-nutritious, refined foods, then spend all day sitting at our desks, in our cars, or at home on the sofa and wonder why the world is getting fatter.

The real benefit of the Paleo Diet is not in the canon of what particular foods we should be eating, but in reminding us of how we are meant to live. Humans evolved to thrive on an active lifestyle eating all-natural foods – no Burger King, no Easy Mac, no gallons of carbonated sugar water. Our ancient cousins had much shorter lifespans due to things like infection, exposure, and being eaten by predators, but overall were much healthier and stronger than today’s typical city-dweller.

Imagine how healthy and long-lived we could be with access to modern medical care and things not trying to eat us! With obesity, heart disease, and diabetes rising out of control, maybe it’s time to look at our roots and get back to basics.