How Much Sugar Should You Eat A Day To Lose Weight? 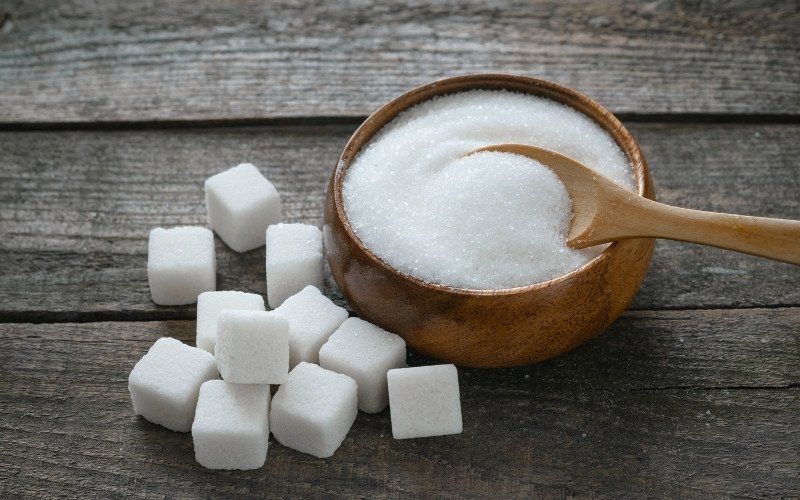 If you’re like most Americans, you probably eat far more sugar than you need.

In fact, as you’ll learn in just a second, the number of teaspoons of sugar the average American eats per day is startling!

Added sugars are simply EVERYWHERE and they are most likely affecting your health.

I have a 4 part article series on sugar that will help increase your awareness of sugar in various foods, teach you how to decrease sugar intake, and finally I’ll also have a sugar challenge for you.

One more thing…don’t miss the video at the end of this post!

Sugar can be divided into two categories (1) naturally occurring and (2) manufactured. Sugar is produced naturally in plants during photosynthesis and found in foods such as fruits, vegetables, and milk. On the other hand, sugar can also be manufactured into high fructose corn syrup, or starch syrup.

Simple sugars have a bad reputation because they enter your blood stream quickly and cause a spike in your insulin levels. Insulin, a storage hormone secreted by the pancreas sucks sugar out of your blood stream into your muscles and liver, which are like sugar storage tanks.

If your storage tanks are full, then the sugar, in the form of glucose goes into your fat cells to make them bigger.

Natural simple sugars like the sugar found in fruits called fructose typically have a smaller insulin response than manufactured sugar, like corn syrup. How quickly sugars enter the blood stream after ingestion is measured by the Glycemic Index.

Okay, where do I begin…

Doctors started to notice ill effects of manufactured sugars on the human body over 200 years ago. Sugary foods were fed to European factory workers in the dawn of industrialization because sugar packed so many calories and was cheap.

Sugar has since been linked to a wide variety of health issues:

If you want 142 more reasons added sugars like high fructose corn syrup should be limited in your diet, you can check out this list of 146 Reasons Sugar is Ruining Your Health1 compiled by a sugar expert.

How Much Sugar Are You Eating?

The answer is probably A LOT more than you think. In a report issued last year, the American Heart Association found that the average American eats 22 teaspoons of “added” sugars per day.

For your reference, 1 teaspoon is 4 grams of sugar. A can of coke has 39 grams of added sugar, or almost 10 teaspoons of sugar. Awful, but true.

Many Americans consume 2-3 pounds of sugar each week compared to the end of the 19th century, when the average American consumed only 5 lbs. per year.

How Much Sugar Should You Eat?

Given that this website is called BuiltLean, we really have to take things a step further than these researchers who don’t really care about getting lean and toned.

Think about your sugar intake in terms of natural sugars like from fruit and milk, and then manufactured, or added sugars like in soda, candies, and pastries. While it may be difficult, I avoid added sugars like the plague, because they provide calories but have absolutely NO nutritional value, and spark hunger. They are “empty calories”.

Yes, it’s hard to avoid added sugars, but I’ll give you some more tips and tricks to make spotting them and reducing them easier.

Regarding natural sugars from fruit and milk, just be cognizant that you’re eating sugars. Yes, these natural sugars are found in nutritious natural foods and you should eat them, but they do still have a similar affect as table sugar, albeit not as intense of an effect on blood sugar levels.

I didn’t include vegetables with fruit and milk because on average vegetables contain very little sugar.

Are You a Sugarholic?

Research has shown that some of us are addicted to sugar as a form of self medication to help elevate mood and energy.

A paper published in the Journal of Nutrition in 2009 found that sugar binging can cause withdrawal symptoms and cravings similar to that produced by addictive drugs.

Here’s an amazing video of Jack Lalanne discussing “Sugarholics” in his TV show in the mid 1950’s.

If you don’t know Jack, he’s considered by many to be the “father of fitness”. On his 70th birthday, handcuffed and shackled, he tugged 70 boats with 70 people on them 1.5 miles. He’s the inventor of too many fitness products to mention.