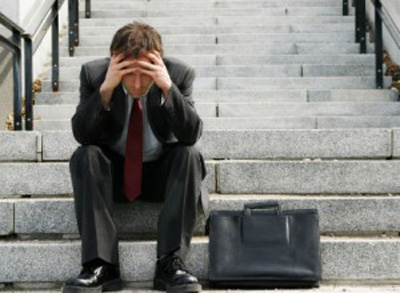 Stress! The word alone can make you feel stressed out. If you’re among those feeling like you have too much stress and not enough time to deal with it, you’re definitely not alone.

Every year, the American Psychological Association puts out a stress survey where they question over 1,000 Americans about their levels of stress. In 2011, over half of Americans (53%) reported having physical symptoms due to stress in the past month.

This article will detail some of the physical maladies of stress, how the stress response in your body works, in particular how it affects weight loss.

You’re probably aware stress contributes to diseases, but did you know that stress is related to 7 of the top 10 killers in the US? Everything from the heart disease and cancer, to diabetes and suicide. In 2011’s APA Stress report, beyond work and family responsibilities, the economy, money worries, and family health problems rounded out the top 5 reasons people cited for stress in their lives.

In addition to all of these psychological factors that cause stress, you might have many physical stressors affecting your body without you even knowing. For example, poor sleep is a major stressor on your body yet most people report not getting enough sleep. Additionally, unknown food sensitivities, blood sugar dysregulation, drug supplies in the water, and poor air quality can all contribute to the stress-load on your body. I mention these additional physical reasons, not to scare you, but because, no matter the sources of the stressor, your body’s response to the stress is the same.

Your Body’s Response to Stress 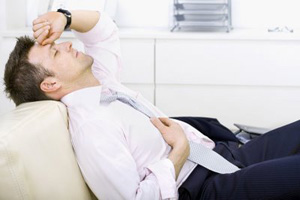 Cortisol is released when your body perceives a stressor and acts as a low-level type of adrenalin released from your adrenal cortex. If you’ve heard of cortisol before reading this article, you’ve probably heard that it’s bad for fat loss and that you probably have too much of it from the amount of stress in your life.

The truth is a bit more complicated than that. Cortisol is a diurnal hormone, meaning your levels of cortisol should peak in the morning (to give you energy) and slowly drop down as the day progresses so you can fall asleep at night. Basically, cortisol is the hormone of energy and alertness. In a normal cortisol cycle, cortisol, in the absence of insulin, helps burn fat along with growth hormone in the morning.

Most people, though, don’t have a “normal” cortisol cycle. For example, most individuals “need” coffee in the morning. This means their cortisol production in the morning is lower than what it should be. Coffee, or more particular, caffeine helps in the morning by causing your body to release a small amount of cortisol. This cortisol release gives you the energy you need to get past the morning but can also cause an over-stimulatory effect on your adrenal cortex, making you rely more and more on coffee over time.

Another sign of a skewed diurnal signal is when you seem to get a burst of extra energy at night. This extra energy at night can cause even more problems as you go to bed later, get less sleep and wake up fatigued, yet again, the next day. This becomes a vicious cycle that can go on for years of fatigue in the morning, energy at night, and poor sleep overall. 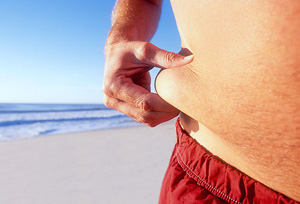 Cortisol’s main job is to provide energy when confronted with a stressor. In hunter-gatherer times, stress was typically an acute situation. You were chased by a predator and either fought it or ran away as fast as you could. After the stressor was over, you went about your life. In today’s society, the stress is almost constant and the chronic nature of stress can cause a number of issues when it comes to weight loss and health, especially when combined with easy access to unhealthy foods.

When cortisol is chronically released from an over-abundance of emotional and physical stress your body reacts in three main ways that negatively affects fat loss:

First, cortisol affects the receptor sites of other hormones making the cells less responsive to their signals. For example, Type II Diabetes is a disease where sufficient insulin is produced, but your body’s cells can’t read the insulin signal. This is called insulin resistance and the onset of insulin resistance typically leads to diabetes when not acted upon with correct dietary and activity changes. When insulin remains high (as happens when you have insulin resistance) your body will not release fat from its fat cells. This basically traps the fat you have into their cells, even if you go on a diet. This is why for some people, low carb diets can work wonders (because they had underlying insulin resistance).

Leptin is another hormone that plays a key role in losing weight. Leptin is a hormone released from your fat cells and acts as a thermostat to gauge how much fat you have and how fast you’re losing it. When leptin levels are high and your brain can read the signal you feel full and don’t over-eat. If your brain can’t read the signal though you have leptin resistance and feel hungry all the time. Generally, if you have insulin resistance, you also have leptin resistance.

Your body has different types of fat that reacts differently. For example, the fat under your skin – the fat that you can grab—is called subcutaneous fat. Another type of fat – lying deeper within your body and surrounding your organs—is called visceral fat. If you’ve ever seen someone with a “beer belly” then you’ve seen someone with a lot of visceral fat. Your body will preferentially store more visceral fat when under stress and why the waist-to-hip ratio can be a strong marker for health.

Visceral fat is considered more dangerous than subcutaneous fat for two reasons. First, visceral fat releases the same inflammatory signals cortisol does. Second, since it surrounds your organs, you increase your odds of organ damage.

The third way cortisol negatively effects fat loss is through a dysregulation of hunger hormones, in particular Ghrelin and Leptin. Leptin, as mentioned above, helps to control your appetite. When you’re overly stressed, leptin levels will drop, making you hungrier. “Growling Ghrelin” is a hormone released anytime you’re hungry and increases dramatically when you’re overly stressed.

The combination of a lower amount of the “anti-hunger” hormone Leptin, and an increase in the “hunger hormone” Ghrelin, causes people to over-eat. In particular, this combination has people reaching for fast-acting carb foods to spike their blood sugar as insulin helps blunt cortisol levels. In other words, you’re more prone to reach for the snickers bar than the broccoli and chicken because your body wants a quick release of sugar to help bring down your cortisol levels.

After reading this far, you might feel as though there is no hope for you with all of these “vicious cycles.” The next article in this 2-part series is 5 simple tips to help manage the stress in your life so you can take control of these cycles once and for all.