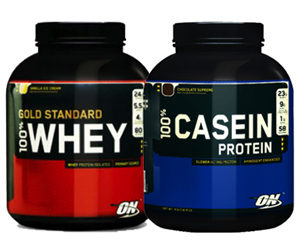 You’ve got a solid exercise routine and your diet is pristine – or maybe you’re just getting started and want to boost your progress. What’s next?

In the arsenal of most athletes, and virtually every bodybuilder, is protein powder. To further complicate this, there are a few different types of common protein shakes on the market. So, what’s the difference? Is there a “best” protein shake? Which protein type optimizes strength gains and body compositions?

What Are The Differences Between Whey, Casein, & Soy Protein?

Whey and casein are dairy proteins found in milk – casein is the “curds” in “curds and whey” (think: cottage cheese). Whey is considered a “fast” protein, because it is rapidly digested in as little as an hour, whereas casein is a “slow” protein that is digested over several hours. Most food sources of protein are also “slow” proteins (eg, eggs, steak, fish), especially when consumed with mixed meals. Soy is a plant-based protein source that is found naturally in soybeans, edamame, and tofu.

There are a few questions to be answered regarding the effects of protein supplementation on strength and body composition. Is there a difference between any of these proteins? Or is it simply an issue of quantity over quality?

We can address these questions from two angles: (1) the short-term effects of different proteins on muscle building and/or the prevention of muscle breakdown and (2) the long-term effects on muscle size and strength.

The former was discussed at length in this article: Is Hydrolyzed Protein Better Than Whey? As a brief refresher, whey protein, regardless of whether it is hydrolyzed or intact, is superior to casein and soy in the short-term… but that doesn’t always guarantee that choosing whey over casein or soy will make you bigger stronger faster. For that, we have to look at the long-term studies.

Whey, Casein, & Soy Protein: Which Is Better In The Long Term?

In one of the few great “long-term” studies that includes multiple different types of post-workout nutrition, Hartman and colleagues show that skim milk, a source of both whey and casein, reigned supreme over soy milk and an isocaloric carbohydrate beverage (similar to Gatorade).1

In this study, 56 healthy untrained young men were put on a rigorous, high intensity resistance exercise program 5 days a week for 12 weeks and given either 2 cups of fat-free milk, soy milk, or carbohydrates to drink immediately and again one hour after exercising. During the entire 12 week program, overall diet was relatively similar in all groups except the carbohydrate group ended up consuming modestly more carbohydrates.

Regarding body composition, those assigned to milk experienced the greatest decline in body fat, and the biggest increases in muscle mass (“FBFM” in the figure below) and muscle cell size (“Muscle fiber CSA”): 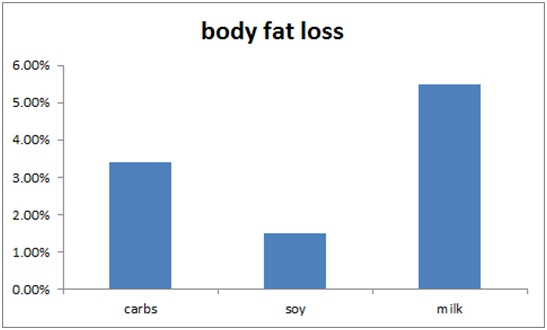 If your goals are geared toward strength gains & improved performance, leg strength drastically increased in the milk group as compared to soy and carbs: 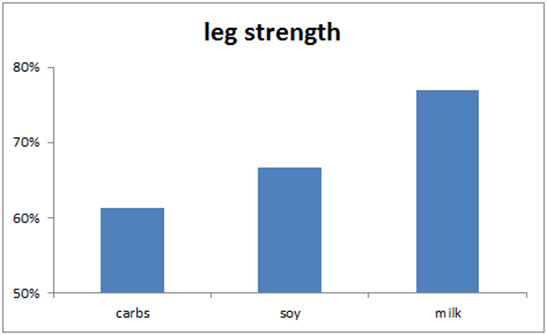 In this study, the results suggest that whey and casein are superior to soy if you’re trying to decrease fat and build muscle.

However, in other studies, results do vary: a similar study by DeNysshen and colleagues comparing whey, soy, and a carbohydrate drink, in men with high blood cholesterol showed improvements in all three groups with no differences between them. 2 Holm and coworkers show that a whey/soy beverage consumed two hours before and after exercise is superior to a carbohydrate drink and placebo in improving muscle size and strength in patients recovering from a knee injury. 3

While we don’t have any great long-term studies that directly compare whey, casein, soy, and placebo, there are some reasonable conclusions that can be drawn:

I. From the article on hydrolyzed proteins, all of the short-term indicators point to whey being the best.

II. The conclusions from the long-term studies also collectively show that your best bet is whey:

If you’re searching for the one best protein, whey certainly comes out the winner in these studies. However, a lot of fitness enthusiasts promote taking a blend, 4 which to the best of my knowledge isn’t wrong – in both the Hartman and Holm studies, blends took the prize.

Furthermore, while whole food sources of protein like steak and eggs might not stimulate acute muscle growth as fast as whey protein, they usually contain a variety of valuable accessory nutrients, vitamins, minerals, etc.

While choosing the best protein supplement for your needs, keep in mind supplements can only “supplement” a proper diet and exercise regimen.